You have probably seen a soccer match ending in a draw, a cricket match ending without a result, but it is not the case with basketball.

Unlike other sports, basketball games don’t end in a tie, even after four quarters of a tied game. Five minutes overtime is added repeatedly till players have given it their all, and a clear winner is declared.

You might be thinking that so many over-times would harm the players’ fitness, and the game dragging on might bore the audience.

Still, it’s not the case, as on average, one over-time is enough to decide a game; we will look more into this and on the way, debunk few myths. Stay tuned.

Basketball Matches That Ended In A Tie – Can It Happen Today?

It is tough to witness matches ending in a tie at the top level, but in history, there have been instances, when basketball matches had ended in ties. Let us take a look at some of them.

1.  Augusta High played Kansas’s Planeview High School in a 28-28 draw On February 4th, 1949, A draw in a basketball game is an unusual outcome. Augusta came from behind to win the game 28-27, and it was thought to be the outcome of the match, but the official scorer noticed an error in the scores after the game. Apparently, in the final period of the game, one free throw from Planeview’s Dean Funk was added to the score.

2.  In 2014 a Division II contest between Winston-Salem State and Johnson C. Smith finished remained tied at 76-76 for 48 hours, after Smith’s player Joshua Linson broke a light over the court, trying a shot in desperation as the final buzzer was looming over his head. There was a risk of injury to the players on the floor, and thus the officials were worried, and the match was suspended. Winsteon-Salem State had the chance to decide the result by a coin flip but chose instead to return to the court. Five minutes of overtime were added, but Smith’s team was victorious.

3.  On February 9th, 1918. The Wildcats of the University of Kentucky travelled to Winchester to play Kentucky Wesleyan College’s team, that resulted in a 21-21 tie. The reality that perhaps the match had resulted in a tie was not found until the players had entered the area to dress up in the locker room. It was thought at first that Wesleyan had beaten the Wildcats 22 to 21. However, the scorers got it wrong by counting the foul that had been disallowed. Wesleyan claimed the match because of the rules. 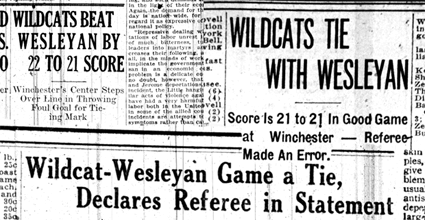 Why were the matches tied?

You can see that there has been some sporadic occurrence where basketball matches have ended in ties, but they were a result of human errors.

In the first example, the tie occurred because the world was not driven by technology, in the modern-day and age, such mistakes don’t happen in the scoring, and even if they occur, the probability of them happening at the highest level is significantly less.

As you can see in the second example, the game had ended in a tie but the flexibility for ties that basketball had meant that the outcome of the match would still be decided despite the fact that 48 hours had passed since the tie.

The 3rd was supposed to end in a draw but the rules at that time meant, that Wesleyan college had won and the score couldn’t be reverted.

We saw two examples, one from the recent past and one from long ago and we can easily conclude that the basketball matches ending in ties are an impossible thing unless a big calamity happens.

What Is Overtime In Basketball?

A basketball game is divided into four quarters, and it varies; for example, in NBA, a quarter is of 12 minutes, while in FIBA, 10 minutes are allocated to each quarter.

After four quarters, if the points earned by two teams are the same, overtime comes into play. Overtime is the allotment of 5 extra minutes to decide the game’s fate; if one overtime is not enough, then another overtime is granted. It repeatedly happens till we have a clear winner.

A match holds the record of most overtimes in basketball’s history played on January 6, 1951, between Indianapolis Olympians and the Rochester Royals (source).

The game had six overtimes, and no match in history has ever seen so many extra minutes.

Should there be ties in basketball?

There is no need for a tie in basketball. The reason is pretty simple. The rules of the game don’t allow the game to end in a tie quickly; the breaks, the substitutes, the free throws given, and the penalties within the game make a tie a rare occurrence, but despite all this, if a game escapes the norm and ends in a tie then overtime is allotted.

The rules change slightly in over-time though; each team is allowed only three fouls before the opposition goes into the bonus.

Unlike the regular quarter where it takes five fouls; this shows that the rules are bend towards ending the match as quickly as possible.

Even in overtime, so 5 or 10 minutes of playing the game more, only generates excitement in the viewers and we witness a great game but not at the expense of the health of the players.

Do teams make a comeback gets more benefits in the overtime?

This is a big myth created by the people because generally, people have a more clear memory of famous comebacks than matches that are neck and neck from the start.

We live in a time and age that statistics are out there to debunk any myth by just a few clicks on the world wide web.

Still, the rarity of a tied match and overtime in basketball means that people don’t have enough statistics to debunk the myth, but prompt research debunked this myth. (source)

Is the fate of all games decided on the same night?

No, in European basketball, the game’s fate is decided over two legs, in the European Champions League, where all teams of Europe compete against each other. The knock out stage gives exciting twists and turns till a winner is declared.

A knock-out tie is played over two legs; the two legs’ aggregate score gives us the victor. Even after the two legs, if the score is tied, the overtime comes into play, and an unlimited number of overtimes are played until a winner is decided.

Who are the ideal players for overtime?

The ideal players for overtime are small. They don’t get tired quickly while big players are drained from energy with ease (Source).

The best strategy is to have a pool of players with energy in the fourth quarter; that pool ideally should consist of players of every size and shape, so your team doesn’t lack in any department when the opposition might have neglected the vital nature of such a pool.

The overtime is the real test of a basketball player’s physical and mental fitness; the resilience they show to carry on despite their body breaking down separates the winners from the losers.

Can overtime decrease the home advantage?

As time passes by, the energy of the crowd decreases. Overtime is a very crunch situation when no team is at an advantage. The crowd is lost in their thoughts because of the uncertainty that creeps in, and instead of getting behind their team, there is a silence in anticipation of the results.

Thus the advantage of playing in front of your home crowd decreases, and both teams are on par. (source)

How are the rules changed in overtime?

The rules are changed when a basketball game enters overtime. In the average regulation time, at the 5th foul, the opposition team is allowed to take two free throws.

During the overtime, at the 4th foul, an advantage is given to the teams being fouled four times but contrasting to the free throws given in regulation time, in overtime, you face two penalties; on the 3rd foul, the opposition is given an opportunity to inbound the ball from the sideline, and on the 4th foul they are allowed to take two free throws.

If a player commits six fouls in total, regardless of committing them in overtime or regulation time, the player must be replaced.

Basketball is an exciting sport that is played by a minimum of 450 million people worldwide (source) and having rules that cater to the hunger for winning of the players.

The audience is significant, and overtime is a rule that helps us expose the tactically, physically, and mentally weak teams and appreciates the teams that are well prepared even after the regulation time.

Incorporating such rules might not be comfortable in other sports, but basketball’s fast pace nature is complemented well by the rules. It also shows how diverse this game is; European basketball has its own set of rules while the other basketball associations carry their own rules.